Powerful human stories are promised at the 11th Human Rights Arts and Film Festival. There will be 15 days of screenings and events in venues across Melbourne: ACMI, No Vacancy, Footscray Community Arts Centre, the Immigration Museum, Fitzroy Library, Newport Substation, and Koorie Heritage Trust.

Human Rights Arts and Film Festival kicks off at five cinemas across Melbourne on May 3. On May 12, the festival is screening the world premiere of Judy Rymer’s Border Politics, wherein human rights lawyer Julian Burnside AO QC travels the globe to compare how different nations are responding to the refugee crisis.

Opening night in Melbourne is headlined by Australian film After the Apology, directed by Larissa Behrendt. Behrendt is an Indigenous (Eualeyai/Gammilaroi) filmmaker, novelist, lawyer and academic. Her landmark documentary explores the practice of Aboriginal child removal, which is happening at almost double the rate of the time of Rudd’s Apology speech.

Brextitannia Following the historic Brexit vote of 2016, Kelly gives the floor to the citizens, without any judgement, travelling around the UK speaking to both sides.

Land of the Free  The documentary records a moving and intimate portrait of the ex-convicts and their families as they strive to find a new place in society. 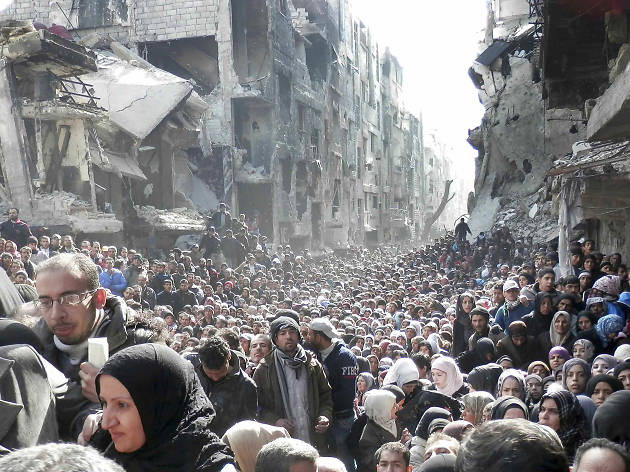 Caliban Caliban explores the battle ground of global climate politics through the eyes of those on the front lines, and brings to the main stage powerful, young, diverse voices from Melbourne’s west, that urgently need to be heard. – See Caliban in Werribee, Drysdale, Shepparton

Do We Need Another Hero? Featured Artists: TextaQueen Imagine yourself as the main character in an apocalyptic action movie, fighting oppressive

A Better Man is an intimate look at violence against women.

Another News Story How does the media manufacture the news of the refugee crisis in the Mediterranean? Making its Australian premiere, the film

Silas This is a story of Liberian activist Silas Siakor, who strives to fight against corruption and environmental destruction.

Last Men in Aleppo is about the remaining besieged citizens in Aleppo, Syria.

HRAFF Goes West: Picture This  A film showcase and conversation with local filmmakers of African heritage This screening will feature brand new works

Step A story of true life challenge and triumph, a group of young women take the stage with a fierceness.

This is Congo This is Congo presents viewers a visceral look at the African conflict: the war consumes its heroes and the civilians that live among it

The Grown-ups, the rights of people with disabilities, and Oscar nominated

Wonder “WONDER is that rare thing, a family picture that moves and amuses while never overtly pandering.”  NY Times

You See Monsters Artists produce their own art which doesn’t shy away from these hidden truths as they express themselves as proud Australian-Muslims within their art forms.

Freedom for the Wolf  The film covers enormous social, geographical and political ground illustrating the dangerous rise of “liberal democracy”.

The Battle of Algiers   Shot with an extraordinary documentary like immediacy, Pontecorvo’s seismic tract retains all of its shocking power and political relevance more than 50 years after its initial release. In its depiction of the popular Algerian uprising against French colonising forces, it fuses neo-realism with galvanising revolutionary agit-prop via stunning handheld camerawork, meticulous staging of chaos, utterly convincing deployment of non-actors and Ennio Morricone’s dizzyingly propulsive score. Few films have had such a pervasive and catalysing influence on dissident world cinema, or indeed on freedom fighting movements themselves.

Soleil O  One of the foundational figures of African cinema, Hondo’s recently rediscovered debut feature is a fierce indictment of French imperialism and a lyrical and deeply expressionistic account of the exploitation of African migrant labour in postcolonial Paris. Whilst not explicitly autobiographical, the film draws deeply upon Hondo’s personal experiences as a Mauritanian migrant living and working, both as a labourer and selfsupporting artist in 1960s Paris. Shot in a piecemeal fashion over four years, and fully self-funded, this seminal film is “suffused with a political indignation that, despite the film’s historical specificity, still feels urgent today” (Dan Sullivan).

Jackson offers an insight into reproductive rights in America;

International Shorts Reflections on conflict, relationships, gender and identity and more. These dynamic stories shed light on the issues of our time

Femme Shorts Whether is it fighting for rights, or exploring hardships, these films feature the empowering stories of women