Where: State Library, corner of Swanston and LaTrobe Streets 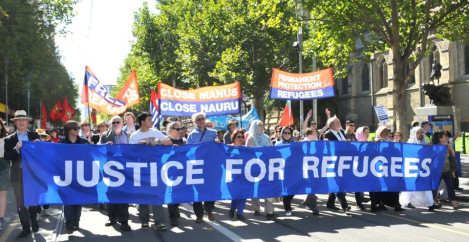 The last few months have seen a renewed growth in support for refugees, through the #LetThemStay camaign to keep the 267 refugees from Manus and Nauru in Australia. So far the Turnbull government has not dared attempt to send any one of the asylum seekers back. However Immigration Minister Peter Dutton is still insisting that they will be sent backhttp://www.abc.net.au/news/2016-04-04/about-90-children-to-be-returned-to-nauru-peter-dutton-says/7297320. We demand that the government let the 267 apply for visas in Australia, and close the camps for good.

With an election now due on 2 July, we want the Coalition put last because they have been the worst refugee bashers. Malcom Turnbull recently said “whether it is Howard as leader of the Liberal Party, Abbott or Turnbull, we’ve had the same policy on border protection…it was not something invented by Tony Abbott”. But we know whoever wins the election we will have a fight on our hands to Close Manus and Nauru. This rally can be an important signal that the fight for refugee rights will continue after the election.

We need to keep up the pressure and deepen the movement for refugee rights to demand that Manus and Nauru together with all the detention camps are closed, and that the major parties end their support for the detention and punishment of refugees.