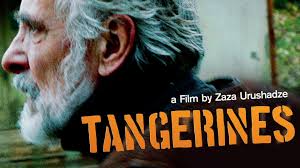 Tangerinesis a film about War in Georgia, Apkhazeti region in 1992. Local Apkhazians are fighting to break free from Georgia. An Estonian village between the mountains has become empty, almost everyone has returned to their homeland. Ivo,an Estonian man,has stayed to harvest his crops of tangerines. In a bloody conflict at his door, wounded men are left behind, and Ivo is forced to take them in. But they are from opposite sides of the war.

The highly-acclaimed character study Tangerines with humanity as its theme will be screening at the Nambour Arthouse Cinema on Wednesday 21 October. (view the flyer)