The first time I met the men Australia has put on Manus Island, it hit me hard. When I tried to return, I was blocked at the airport 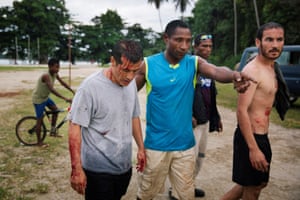 During my trip to Manus in 2016, I witnessed the aftermath of two refugees being beaten up with metal pipes by a mob of locals, one of the reasons the men were – and still are – too afraid to leave the camp. I got detained for photographing the violent attack. Police told me not to publish the photos and the manager of the detention centre warned me: “What you do now will determine whether you are ever allowed to visit PNG again.” I published the photos.