After being forcibly taken to Lorengau, Bangladeshi Joinul Islam’s fears were realised and he was attacked again. 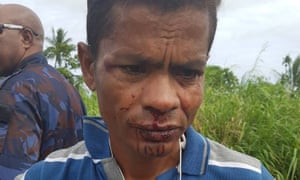 At the time of the attack Islam was still suffering from a damaged arm sliced open several months ago.

A refugee has been attacked in Manus for a second time amid rising tensions in Lorengau and protests from Manusians over the new Australian-run refugee centres in the town.

The Guardian first spoke with Bangladeshi refugee Joinul Islam last month during the standoff at the decommissioned immigration detention centre at Lombrum when he said he feared for his safety if he was taken back to Lorengau.

At the time Islam was still suffering from a damaged arm sliced open several months ago with a machete when he was attacked in Lorengau. It had not properly healed and promised follow-up surgery had not eventuated.