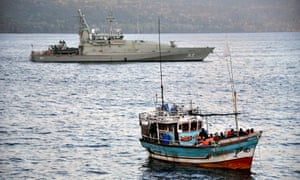 Malcolm Turnbull has again rejected an offer from New Zealand to take 150 refugees from Australia’s offshore detention centres saying: “Settlement in a country like New Zealand would be used by the people smugglers as a marketing opportunity.”

A spokeswoman for the New Zealand immigration minister, Michael Woodhouse, said on Thursday that an old offer to take 150 asylum seekers a year remained on the table, but he had not been approached by the Australian government.